He also gives you the weather on KXLY 920 every ten minutes on the “9’s”; keeping you up to date as you drive to and from everywhere.

Being a product of Montana, Mark traveled and moved many times as a youth and decided to choose the path of talking and comedy to fit into the various schools he attended. A perfect fit for speech and debate, Mark joined in during high school. That continued into college, and when a job was needed, he found a DeeJay job at 1090 KBOZ.

Mark Peterson has now been in broadcasting for more than three decades, with over 25 years in television. He graduated from high school in Billings, Montana, and attended college at Montana State University in beautiful Bozeman. He has worked in Billings, Bozeman, and Northern California and has traveled extensively throughout the U.S., both with work and for enjoyment.

Mark has served on many boards for various charities; currently on the board for Boys and Girls Club of Spokane. He has also spoken to groups of 10 to 10,000 people, and assists the Spokane Lilac Association (Purple Coaters) with the annual Armed Forces Torchlight Parade.

Mark has three sons and yes, he says, “My three sons.” The youngest, Tillman, is 10 years old, Matthew is a senior in high school, and the oldest is Joseph.

In his free time, Mark enjoys working on his many projects that some might call ‘cars’. And although frustrated by golf, he makes an attempt at it often. Fishing and traveling are also things Mark enjoys when time allows. 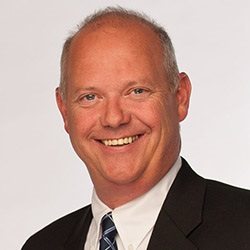