Dave Ramsey has an unusual way of looking at the world. His wife, Sharon, says he’s weird, and truthfully—he is weird. But there’s a reason. Starting from nothing, by the time he was 26, Dave had a net worth of a little over a million dollars. He was making $250,000 a year—that’s more than $20,000 a month net taxable income. He was really having fun. But 98% truth is a lie, and that 2% can cause big problems, especially with $4 million in real estate. He had a lot of debt—a lot of short-term debt.

After eventually losing everything, Dave went on a quest to find out how money really works, how he could get control of it, and how he could have confidence in handling it. He read everything he could get his hands on. He interviewed older rich people, people who made money and kept it. That quest led him to a really, really uncomfortable place: his mirror. Dave came to realize that his money problems, worries, and shortages largely began and ended with the person in his mirror. He also realized that if he could learn to manage the character he shaved with every morning, he would win with money.

Dave decided to go back to his first love, real estate, in order to eat and to get out of debt. Along the way, he began another path—the path of helping others, literally millions of others, take the same quest to the mirror.

Dave formed The Lampo Group in 1992 to counsel folks hurting from the results of financial stress. He’s paid the “stupid tax” (mistakes with dollar signs on the end) so hopefully some of you won’t have to. He wrote the book, Financial Peace, based on all that Dave and his wife had learned, which he began selling out of his car. With a friend of his, he started a local radio call-in show called, The Money Game, now nationally syndicated as The Dave Ramsey Show.

Dave Ramsey’s company history is full of landmarks leading up to the release of their third best-selling book in 2003—The Total Money Makeover—and they are not slowing down. The Lampo Group now has more than 300 team members and a variety of products and services to help people reach their financial goals. Many companies define success based on the dollars coming in, but at The Lampo Group, they define their success by the number of lives changed: listeners getting out of debt, readers taking their first Baby Step and saving $1,000, FPU graduates investing for their future.

Wherever you are in the process—making the quest to your mirror, struggling to get your budget to work, paying off that last debt, debt free and looking for places to give—let them know how they can help you take that next step in your money makeover. That’s what they are here for. 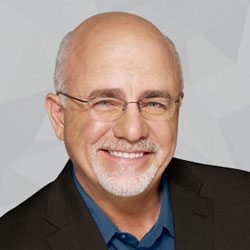