Kris started in radio in 1991, producing high school sports games in Kalispell, MT. He worked at Rock, Country, and News/Talk stations in Montana for 7 years, and has lived in the Inland Northwest since 1999. After brief stints at News/Talk and Oldies stations in Spokane, Kris became part of the KXLY Broadcast Group for over 11 years at KHTQ Rock 94 1/2, and was morning show co-host on KVNI 1080. He then helped launch a new Christian Country music format at a small non-profit station in North Idaho and worked there for over 8 years. Kris is also Program Director of 920 News Now, along with being on the morning show.

Kris was born in Spokane, and raised in a small town of less than 100 people in northwest Montana. He is a devoted husband and father of 4 kids in a blended family, ranging in age from 9 to 25 years old, and has recently become a grandfather for the first time. He loves taking road trips, camping, hiking with his youngest daughter, singing karaoke with his wife, or lounging around at home watching streaming TV.

For more than 20 years, Teresa has been a fixture in broadcast journalism on Spokane television and radio. After a three-year stint as a live reporter on KXLY TV’s Good Morning Northwest Teresa jumped into radio in 2002—first as a morning host on Classy 99.9 FM, and then as a news anchor on KXLY 920. All the while holding down duel broadcast roles as the host of Good Morning Northwest Sunday.

Teresa is a Northwest native who grew up in the small town of Winthrop, WA. Aside from two years in Butte, Montana where she started her broadcast career, she has never lived outside the state of Washington. She and her husband Rick have been married over 30 years, and have two adult daughters—both Spokane born and raised, and both graduates of Washington State University. 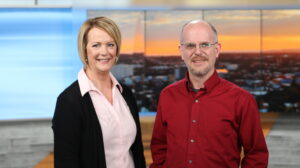