Rick Edwards joined KXLY in 2005 as a Board Operator/News Producer, shortly after graduating from the American School of Broadcast. Since then, Rick has been a former weekend DJ with Classy 99.9, Spokane’s River 99.9, and is currently on-air Saturday and Sunday evenings for The Big 99.9 Coyote Country.

Mostly though, Rick is a “behind the scenes” guy who works weekdays as a Radio Programmer for ESPN and helps in the “Traffic” (or commercials) department.

He also enjoyed theater in high school, and has recently returned to the Performing Arts at TAC in Spokane Valley.

Graduating from Okanagan College in Penticton in the early 90’s, Rick worked at the largest winery in Canada for 2 years in Oliver, B.C., and still enjoys a good bottle of wine and the occasional lager from his home country. After moving to the U.S. in the late 90’s, Rick became a self-employed karaoke DJ, and still DJ’s for school events and the occasional wedding or party.

Besides playing hockey, other hobbies that Rick enjoys are traveling, music, riding his motorcycle, playing video games, and watching movies.

Being a BIG sports fan, you will always find Rick cheering on the Seahawks, Mariners, Vancouver Canucks, Zags, and Cougar Football. Combining his love for both radio and sports, Rick also has been the play-by-play “Voice of the Spokane Braves” Junior B hockey team for the last 5 years.

Rick is happily married since 1994 to his lovely wife Mandy, and they have two wonderful kids, Mya and Kara. 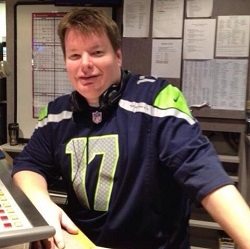